Florence, Italy: cradle of the Renaissance 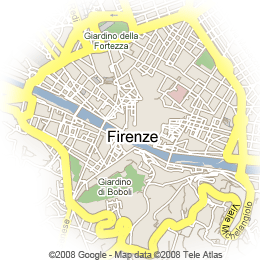 Florence's museums, palaces, and churches house some of the greatest artistic treasures in the world. The most popular and important sites in Florence include the Cathedral, the Baptistery, the Uffizi, theBargello, and the Accademia. The churches of Santa Maria Novella and Santa Croce are veritable art galleries, and the library of San Lorenzo is a magnificent exhibition of Michelangelo's architectural genius. Wander some of the oldest streets in the city until you reach the Arno River, cross the Ponte Vecchio, and experience the "newest" area of Florence, the Oltrarno. Be sure to set aside time to see the vast and varied art collection housed in thePitti Palace. When you grow weary of museums and monuments, head outdoors. Spend a day at theBoboli Gardens or climb the hill to the church of San Miniato al Monte to experience an enchanting view of Florence.

Florence and its magnificent treasures await your visit!

The Medici Villa della Petraia is an impressive country residence built on a panoramic terrace in the outskirts of Florence in the small hamlet of Castello. From its position, you can have a beautiful view over its rich Italian garden and the valley where the famous Renaissance city is located on. 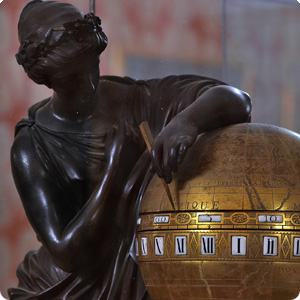 The building was originally bought by theBrunelleschi family, who later sold it to Palla Strozzi in 1422. In first half of the XVI century, the villa passed to the Salutati family. This one transferred the property to the Medicifamily. In this time, the Cardinal Ferdinando, who was nominated Grand Duke in 1587, carried out a radical transformation of the villa, turning the villa from a mansion into a princely residence.

The project was accomplished by building around the fourteenth century central tower, but the most significant changes were actually carried out in the surrounding park. First, it was divided into three magnificent terraces: the first one was dedicated to the placement of dwarf fruits, the second one adorned by flower beds while the third one was designed with two elliptical areas where many general and citrus trees were planted. 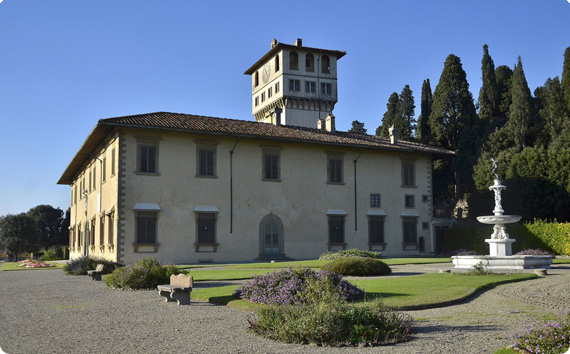 Today, we can admire what the garden must have looked at that time by observing the depictions painted by Giusto Utens in the series called villa in a lunette dated 1599/1602. A walk in the park during the spring time is the best time to visit, time at which you might even find a wedding photo shoots taking place ..very popular location for photographer like me! The garden statues (the first is the Venus by Giambologna) add adornment to Petraias majesty, but the nineteenth century tower and the sundial which marks the season in a very old style are also very interesting to visit and see.

Florence's cathedral stands tall over the city with its magnificent Renaissance dome designed by Filippo Brunelleschi. The cathedral named in honor of Santa Maria del Fiore is a vast Gothic structure built on the site of the 7th century church of Santa Reparata, the remains of which can be seen in the crypt.

The cathedral was begun at the end of the 13th century by Arnolfo di Cambio, and the dome, which dominates the exterior, was added in the 15th century on a design of Filippo Brunelleschi. A statue to each of these important architects can be found outside to the right of the cathedral, both admiring their work for the rest of eternity. Can you imagine it took two centuries for the cathedral to be deemed finished?

The church was consecrated as soon as the dome was in place although the façade (front of the church) was only half finished by then. It was just decoration, and thus remained unfinished up until the 19th century. At that point, it was actually redone by the likes of the time and finally finished!

The exterior is covered in a decorative mix of pink, white and green marble. The interior, by contrast, is pretty stark and plain but quite enjoyable on warm summer days since the temperature inside tends to be cooler. The mosaic pavements are certainly its main attraction within. 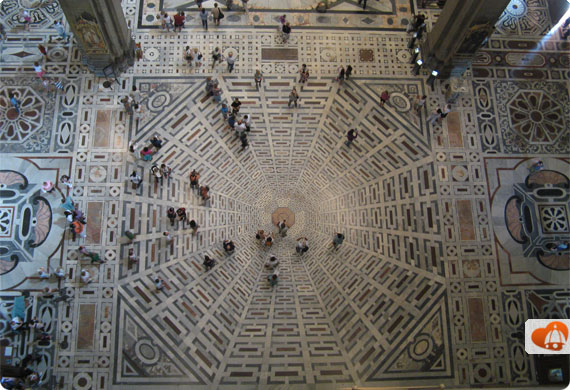 Please note the clock above the entrance on the inside of the church. It was designed in 1443 byPaolo Uccello in accordance with the ora italica, where the 24th hour of the day ended at sunset... and it still works!

The biggest artwork within the cathedral is Giorgio Vasari's frescoes of the Last Judgment (1572-9): they were designed by Vasari but painted mostly by his less-talented student Frederico Zuccari by 1579.

The Uffizi is the most important and visited museum in Florence. The Uffizi palace was designed and begun in 1560 by the architect Giorgio Vasari in the period when Cosimo de' Medici, first Grand Duke of Tuscany, was bureaucratically consolidating his recent takeover of power. Built in the shape of a horseshoe extending from Piazza della Signoria to the Arno River and linked by a bridge over the street with Palazzo Vecchio, the Uffizi were intended to house the administrative offices (uffizi) of the Grand Duchy. From the beginning, however, the Medici set aside a few rooms on the third floor to house the finest works of their collections. The Gallery was subsequently enriched by various members of the Medici family. Two centuries later, in 1737, the palace and their collection were left to the city by Anna Maria Luisa, the last Medici heir, and today houses one of the world's great art galleries. 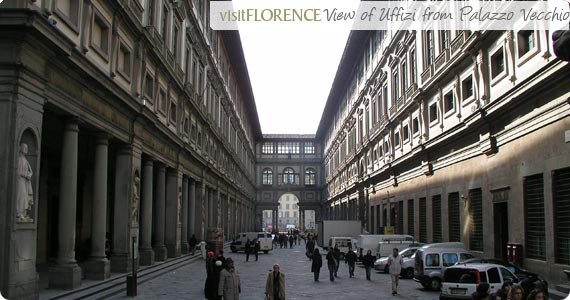 Palazzo Vecchio, literally the "Old Palace", still fulfils its original role as Florence's town hall. Completed in 1302 by Arnolfo di Cambio, the palazzo retains its medieval appearance although much of the interior was remodeled for Duke Cosimo I when he moved into the palace in 1540, transferring the ruling family from its old residence near San Lorenzo (now known as the Palazzo Medici-Riccardi, on via Cavour). It became known as Palazzo Vecchio when Cosimo transferred his court to Palazzo Pitti. During the brief period that Florence was the capital of Italy (1865-71), it housed the Parliament and Foreign Ministry.

The original part of Palazzo Vecchio is the work of Arnolfo di Cambio (1245-1302) and was built at the turn of the thirteenth and fourteenth century as the seat of the Priors. Successive additions of the fifteenth and, above all, of the sixteenth centuries have changed the scale of the rear of the palace without modifying the massive appearance of the huge blocks, gallery and tower dominating Piazza Signoria. 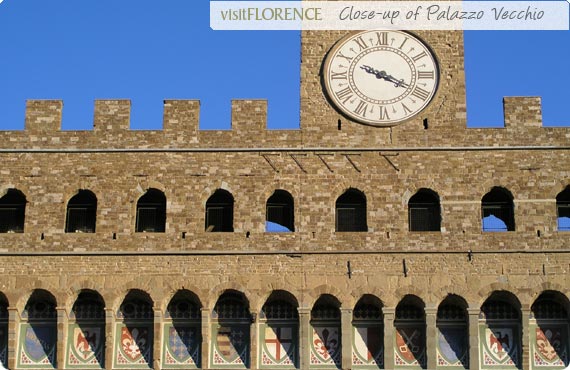 Initially the seat of the Signoria, Palazzo Vecchio was also the temporary residence of the Grand Ducal family under Cosimo I de' Medici before their transfer to Palazzo Pitti. It was during this period, from 1550 to 1565, that Vasari transformed it, sumptuously redecorating the newly reconstructed interiors for the palace's role both as the seat of government and as the official residence of the ruling family. The entire palace is a museum, especially the so-called "Monumental Quarters".

Open all of the time, along the pedestrian zone south of Piazza della Repubblica towards Palazzo Pitti 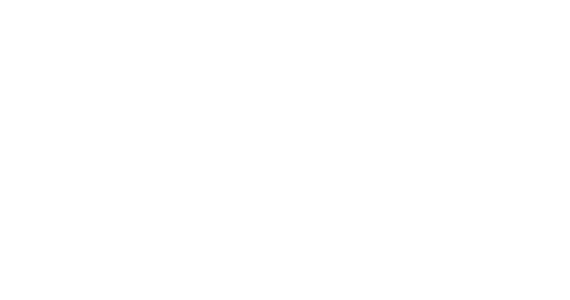 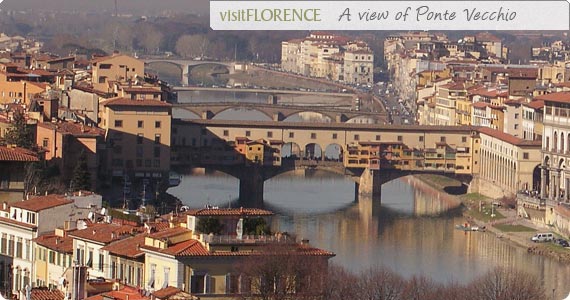 Florence » What to See » Monuments & Piazzas »

Built very close to the Roman crossing, the Old Bridge was until 1218 the only bridge across the Arno in Florence. The current bridge was rebuilt after a flood in 1345. During World War II it was the only bridge across the Arno that the fleeing Germans did not destroy. Instead they blocked access by demolishing the medieval buildings on each side. On November 4, 1966, the bridge miraculously withstood the tremendous weight of water and silt when the Arno once again burst its banks.

When the Medici moved from Palazzo Vecchio to Palazzo Pitti, they decided they needed a connecting route from the Uffizi to the Palazzo Pitti on the other side of the Arno that would enable them to keep out of contact with the people they ruled. The result was the Corridoio Vasariano, built in 1565 by Vasari and which runs above the little goldsmiths' shops on the Ponte Vecchio.

There have been stores on the Ponte Vecchio since the 13th century. Initially, there were all types of shops, including butchers and fishmongers and later tanners, whose industrial waste caused a pretty rank stench. In 1593, Ferdinand I decreed that only goldsmiths and jewellers be allowed to have their stores on the bridge. Cellini, a 16th century goldsmith, is honoured with a bust on the bridge. By night, the wooden shutters of the shops make them look like suitcases and wooden chests, making it a very suggestive route to take along an evening passeggiata, or stroll.

The Piazza della Signoria has been the center of political life in Florence since the 14th century with the prominent Palazzo Vecchio overlooking the square. It was the scene of great triumphs, such as the return of the Medici in 1530 as well as the Bonfire of the Vanities instigated bySavonarola, who was then himself burned at the stake here in 1498 after he was denounced by the Inquisition as a heretic. A marble circle inscription on the piazza shows the location where he was burned.

The sculptures in Piazza della Signoria bristle with political connotations, many of which are fiercely contradictory. The David (the original is in the Galleria dell'Accademia) by Michelangelowas placed outside the Palazzo Vecchio as a symbol of the Republic's defiance of the tyrannical Medici. Bandinelli's Hercules and Cacus (1534) to the right of the David was appropriated by the Medici to show their physical power after their return from exile. The Nettuno (1575) byAmmannati celebrates the Medici's maritime ambitions and Giambologna's equestrian statue of Duke Cosimo I (1595) is an elegant portrait of the man who brought all of Tuscany under Medici military rule.

The graceful Loggia dei Lanzi, which functions as an open-air sculpture gallery, was designed byOrcagna in 1376. Its curved arches foretell Renaissance classicism. The statue of Perseo holding Medusa's head, by Cellini (1554), is a stark reminder of what happened to those who crossed the Medici, and along with Giambologna's Rape of the Sabines, are two of many beautiful sculptures found under the arches of the Loggia dei Lanzi. 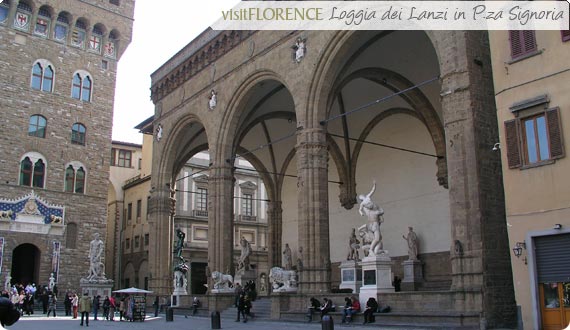 Credit card(s) must be in the name of the main driver.

Make sure you have enough limit to cover the excess.

In the event that you fail to present a valid credit card or lack of sufficient funds available on the credit card, car rental agent may refuse to release the vehicle. In these instances, no funds paid will be reimbursed.

Another form of identification is required.

A full license held for minimum of 3 year with no major endorsements. UK licenses holders need to present the photocard and the paper counterpart.

A printed version of your voucher must be produced on arrival at the rental desk. Failure to present the voucher means the car rental agent may charge you at the local rates. Please note: We are not responsible for overcharges on rentals where the voucher was not presented to the local agent on collection of the vehicle. If you do not present the required documents, the documentation is not valid or you do not have enough funds on your credit card, the car rental agent may refuse to release the vehicle and no funds will be reimbursed

If you do not present any of the documents listed above, the documentation is not valid or you do not have enough funds on your credit card, the car rental agent may refuse to release the vehicle and no funds will be reimbursed to you.